Whether institutions or markets are more or less deserving of protection from binding liquidity constraints has been a recurring theme in debates about bail-in, closeout netting protocols, and access to central bank lending. However, it has rarely been addressed as a unifying theme for governing finance in all its manifestations. The conference on “Finance between Liquidity and Insolvency” organized by Prof. Dan Awrey, Oxford, Prof. Brigitte Haar, SAFE, and Prof. Katharina Pistor, Columbia, at the House of Finance on Dec. 11 and 12, 2015 sought to fill this gap. Prior to the financial crisis, there was a tendency in finance to view (il)liquidity and (in)solvency as conceptually distinct problems, capable of being analyzed and regulated independently of one another. Nowhere was this more clearly the case than in banking regulation. Finance is, however, no longer all about banks and many of the challenges of bank governance faced over the centuries are now replicated at the level of non-bank financial intermediaries and at the intersection between financial institutions and markets. The two-day conference was organized around three main themes: Markets vs. Institutions, Safety Nets, and “Liquolvency” with specific institutional arrangements scrutinized that revolve around these themes. The final theme (Liquidity v. Insolvency: False or Real Dichotomy?) was a wrap-up session aiming to conceptualize the relation between (il)liquidity and (in)solvency. 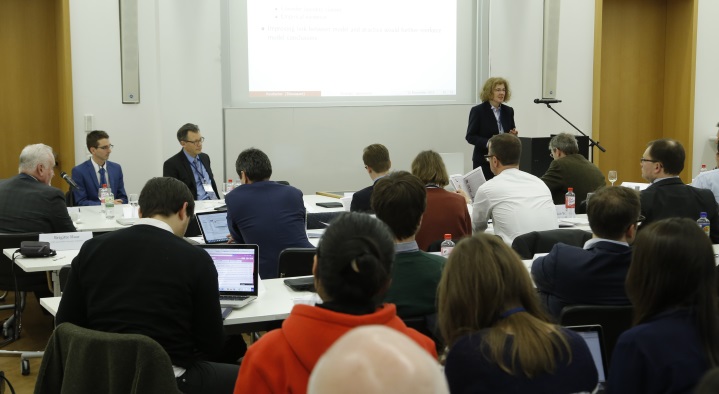 The conference brought together prominent legal scholars and economists from academia in Western Europe and the US and the policy-making sector, such as the ECB, the Chicago Fed, and the Banque de France, to discuss these issues.

The discussions highlighted the main challenges in order to address liquidity problems of financial institutions and markets: Rigid, clear, non-discretionary, non-arbitrary legal institutions and automatic enforcement of contractual obligations, which satisfy the rule of law and legitimacy requirements, are not apt for addressing liquidity problems. Similarly, market discipline-based regulatory mechanisms such as early bail-ins seem to aggravate rather than resolve liquidity problems. Instead, arbitrary and non-transparent interventions of central banks seem to be the most efficient response to these problems, but they negate both legitimacy and rule of law, and exacerbate the moral hazard problem. The rule of law and legitimacy challenges are aggravated further by the globalization of financial markets, which requires coordination of domestic regulatory responses. However, in times of crisis, most of the pre-crisis commitments of national regulators would not be credible as domestic regulators have strong incentives in crisis times to externalize the costs of crisis to other jurisdictions.