The latest downgrades of Greece, Portugal and Spain have led to renewed calls for curbs on credit rating agencies. However, economic research reveals that there are insurmountable obstacles to effective oversight. This is why legislative attempts to regulate rating agencies have been unsuccessful. Due to the recent global financial crisis and the related failure of rating agencies, new proposals in this field have been put forward. A new European regulation on rating agencies has just entered into force, which raises anew questions about regulatory effectiveness and the necessary financial architecture.

I. THE LIMITS OF REPUTATIONAL MECHANISMS

The economic problems in the rating sector are rather unique in comparison to those for other financial intermediaries. To begin with, one would expect rating agencies to be controllable ex post because their ratings can be correlated with actual defaults. Nevertheless, the functioning and potentially disciplinary effect of the resulting reputational mechanism requires free market entry. In the rating sector, however, there seem to be insurmountable entry barriers. First, the rating industry is marked by considerable network effects. This is because investors benefit from the comparability of different ratings and the underlying rating categories and, therefore, prefer ratings from larger agencies. Over time, the two rating norm has evolved and the majority of big bond issues are now rated by both Moody’s and Standard & Poor’s. Secondly, if an issuer wants to switch from a known rating agency to a new market entrant, he may be subject to lock-in effects arising from the reputation value of ratings and may also face suspicions of rating shopping by going away from the well-established Moody’s and Standard & Poor’s. A third obstacle to competition in the rating sector is the lack of product differentiation that makes it impossible for newcomers to specialize in a certain niche market. Since investors demand very high service quality for any type of debt issue, a new entrant cannot focus on certain levels of credit risk, but at best can specialize on certain regions or industries.

In light of these high entry barriers, it comes as no surprise that regulatory efforts have turned out to be not very effective. In Europe, there was no binding regulation until very recently. Instead, self-regulation on the basis of the IOSCO (International Organization of Security Commissions) Code of Conduct issued in 2004, which was subsequently refined in 2007 and 2008, has been implemented by most, including the major rating agencies. The IOSCO Code follows an input-oriented approach. It prescribes rigorous, systematic methodologies open to objective validation and the provision of adequate personnel and financial resources for developing, monitoring and updating ratings. During the global credit crisis, the goal to improve rating quality by way of increased competition was increasingly attacked, since competition may raise the prospect of rating shopping, and thus lead to a decrease in quality.

Such negative repercussions of serious conflicts of interest have not been adequately addressed by legislators so far. One of the most important is the issuer pay model, with about 90% of rating agency revenues coming from issuers who pay for their ratings. In addition, further concerns with respect to another conflict of interest are expressed, when rating agencies offer consulting or advisory services to issuers they rate and practically become part of the underwriting team. 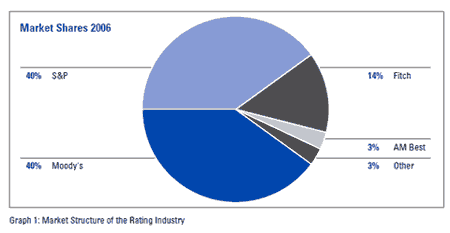 III. A NEW EUROPEAN FINANCIAL ARCHITECTURE AS A WAY TOWARDS REFORM

The European Regulation (EC) No. 1060/2009 on rating agencies of 16 September 2009, which was implemented under German law on May 6, 2010, aims to diminish such conflicts of interest by focusing on improvements to corporate governance and on timely disclosure. Rating agencies are now obliged to have independent compliance departments and to review their rating methodologies periodically. Analysts are also excluded from making any proposals or recommendations regarding the design of structured finance instruments due for a rating by their agency. Transparency is required with respect to models, methodologies, and details about both agencies’ financial figures and the rotation systems to be installed under the regulation.

It is beyond doubt that the regulation addresses important questions by focusing on typical conflicts of interest. As stipulated, enforcement is left to the member states’ authorities, which have jurisdiction to register rating agencies and can, among other things, withdraw their registration and take other necessary enforcement measures. The latter have to be suitable, proportionate, have a deterrent effect, and include fines of considerable amounts in Germany. Having said this, given the intricate economic problems present in the rating market, it is clear that a public regulator can only implement second best solutions for improved rating quality. This raises the question whether there should not also be additional private enforcement possibilities. Up until now, national liability rules have failed to take hold. This failure could be overcome by rules that prescribe the disgorgement of profits made from ratings that were given in violation of the new European regime. The idea of private and public enforcement mechanisms working side by side would most probably contribute to an improvement in rating quality.

Following the de Larosière report on EU financial market supervision, the European Commission’s proposal for a regulation to establish a European Banking Authority envisages a far-reaching competence for this authority in the rating sector. How effective this would be, of course, remains to be seen. It may be that additional complementary mechanisms, such as the private enforcement considered above or supplementary quality control by independent experts, will also be needed. Nonetheless, the new European regulation on rating agencies will soon be revised. Thus, the rating sector could be the first branch of the banking industry to constitute an important building block of a truly European financial supervisory architecture; one with, however, further potential for improvement.

Hunt, J. (2009)
“Credit Rating Agencies and the ‘Worldwide Credit Crisis”,
The Limits of Reputation, the Insufficiency of Reform, and a Proposal for Improvement,
Columbia Business Law Review, Vol. 2009, pp. 109–161.