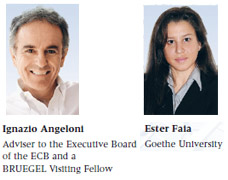 The crisis of 2007-2009 has shown that banking and financial market structures can at times interact with macroeconomic conditions and monetary policies in ways that generate financial disruptions and systemic instability. Existing macro models are not wellequipped to capture these phenomena. The next generation of macro models, however, should be capable of expressing the interaction between finance and macroeconomics, and of incorporating the risks stemming from the interplay between the banking sector, financial markets and monetary policy. What implications do expansionary monetary policies have for the risk taking behavior of banks? What role do secondary markets play in terms of igniting and fostering systemic risk? What is the optimal combination vis-à-vis macro-prudential regulation and monetary policy? And what are the consequences of financial globalization for the stability of financial markets? These, among others, are the questions that remain to be answered following the financial crisis.

A recent research program by Ester Faia responds to these questions by building up a benchmark for macro models which include different aspects of the banking sector. This program involves three main lines of research.

The first of these is a work co-authored with Ignazio Angeloni (ECB and BRUEGEL), titled “A Tale of Two Policies: Prudential Regulation and Monetary Policy with Fragile Banks”, which studies the optimal combination of monetary and macro-prudential policies. In this paper, Angeloni and Faia introduce optimizing banks, modeled along the lines of Diamond and Rajan (JoF 2000 or JPE 2001), into a macro (dynamic stochastic general equilibrium) model. This framework is then used to study the role of banks in the transmission of shocks, the effects of monetary policy when banks are exposed to runs, and the interplay between monetary policy and Basel-like capital ratios. Banks in the model choose the optimal capital structure in order to maximize the expected return for outside investors, namely uninformed investors and bank capitalists. In equilibrium, bank leverage depends positively on the uncertainty of projects and on the bank's "relationship lender" skills, and negatively on short-term interest rates. A monetary restriction reduces leverage, while a productivity or asset price boom increases it. The transmission of all shocks points in the direction of a risk-taking channel: low interest rates, as induced by lax monetary policies or productivity booms, encourage banks to take on too much risk, thereby leading to the phenomena of exuberance and over-reaction. In this environment, pro-cyclical capital ratios are destabilizing; monetary policy can only partly offset this effect. The optimal (utility maximizing) policy combination includes mildly anti-cyclical capital ratios and a monetary policy response to asset prices or leverage.

The results of the aforementioned paper are of great policy relevance. In fact, they were recently presented to the Executive Board of the European Central Bank in a policy seminar.

A second line of research pursued by Ester Faia is the role of the secondary market for asset-backed securities (ABS) in the transmission of shocks in macro models. The financial crisis has highlighted the limits of the "originate- to-distribute" banking model, but its nexus with the macroeconomy and monetary policy remains unexplored. In a paper titled “Credit Risk Transfer and the Macroeconomy”, Ester Faia builds a macro (dynamic stochastic general equilibrium) model with banks, and examines its properties with and without active secondary markets for ABS. In this model, it is assumed that banks are subject to liquidity shocks which may induce them to sell loan claims on unfinished projects in secondary markets. Both the origination and the selling activity are subject to moral hazard problems. Firms, after having obtained loans from the bank, might choose to exert a low effort and thus undermine the success of a project unless properly monitored. Through monitoring, banks acquire private information about firms' projects. This leads to a second moral hazard problem between depositors ("uninformed investors") and banks; one which becomes even more severe when the bank has the possibility of selling loans on the secondary market. The bank is inclined to offer the loan on the secondary market in the case of a liquidity shock or if it knows that the loan is non-performing. The possibility of transferring credit not only reduces the impact of liquidity shocks on bank balance sheets, but also the bank incentive for monitoring. As a result, secondary markets free up bank capital and exacerbate the impact of productivity and other macroeconomic shocks on output and inflation. By offering the possibility of capital recycling and by reducing bank monitoring, secondary credit markets in general equilibrium allow banks to take on more risk. This research has been awarded the prestigious Lamfalussy award.

The last line of research refers to a paper which explores the consequences of financial globalization for an optimal policy: part of a bigger research project sponsored by an FP7 grant from the European Community, whose team leaders are Michel Juilliard, Ester Faia, Paul Levine, Albert Marcet, Joe Pearlman, Marco Ratto and Volker Wieland. More specifically, the paper is co-authored by Ester Faia and Eleni Iliopulos and titled “Financial Globalization, Financial Frictions and Monetary Policy”. It studies the optimal setting of monetary policy in an environment in which foreign lending finances expenditure on housing. The authors find that monetary policy should target the exchange rate rather than the domestic inflation rate in order to contain persistent global imbalances.

The full articles are available at: www.wiwi.uni-frankfurt.de/profs/faia/