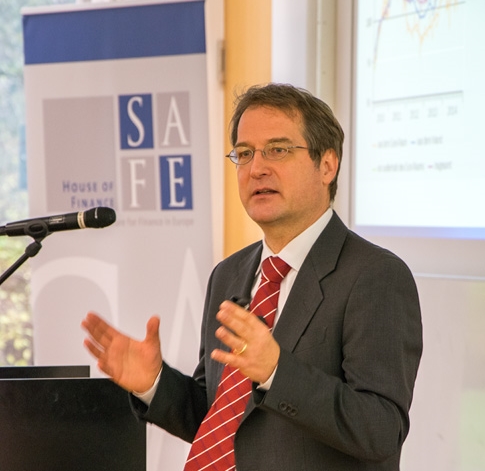 On December 1, 2014, Volker Wieland presented the annual report 2014/15 of the German Council of Economic Advisors in a SAFE Policy Center Lecture. Wieland, Professor for Monetary Economics at the Goethe University Frankfurt and Managing Director of the Institute for Monetary and Financial Stability (IMFS), is a member of this council since March 2013. First, Wieland gave insights in the council’s analysis of the macroeconomic developments in Germany and summarized its assessment of the federal government’s labor, pension and energy policies. Then, he also referred to the assessment of the monetary policy in the euro area.

With regard to the euro area, Wieland emphasized that structural reforms and the consolidation of public households in Ireland, Portugal and Spain have already led to an improvement of the economic situation of these countries, and that also Greece has managed to bring back growth to its economy. As the Council of Economic Experts sees the main danger for the euro area in the low pace of reforms in Italy and France, Wieland strongly recommended that these two countries implement the advice formulated by the International Monetary Fund in its Article IV consultations. In this context, he also criticized the developments in the area of monetary policy which aim at broadening the ECB’s balance sheet also by purchasing government bonds if necessary. This would reduce the pressure on the crisis countries’ governments and increase their inclination to postpone urgent reform and consolidation measures.

In the view of the Council of Economic Experts, also the ECB’s low interest rate policy implies risks for the long term economic development of the euro area. With the interest rates at very low levels, the financial sector could be inclined to take too much risk. Negative consequences of these misallocations for financial stability need to be weighed up against the risks linked to deflation, which are, following the experts, relatively low. A lively discussion with the audience followed the lecture.