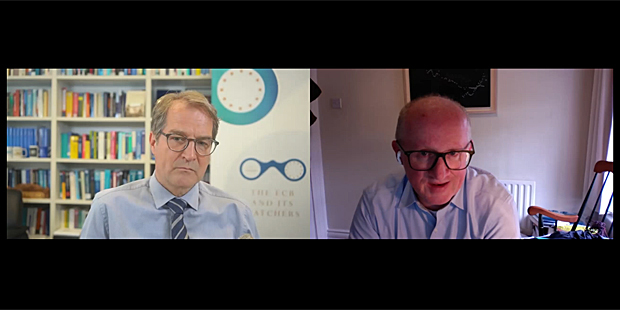 The recent strategy review of the European Central Bank (ECB) was the topic of the IMFS Policy Webinar with Philip R. Lane on September 15. In the discussion moderated by IMFS Director Volker Wieland, the ECB Chief Economist illustrated the outcome of the review presented in July.

In this process, 13 Eurosystem workstreams covered key topics, such as inflation measurement, monetary policy instruments, employment or digitalization. While the results are summarized in the new monetary policy statement, the overview note and a climate change action plan, more information will be available in 18 occasional papers, Lane announced. The IMFS conference „The ECB and Its Watchers“ one year ago also served as a listening events with academics within this context.

The strategy review takes the ECB’s mandate as given. The Governing Council is bound by the ECB’s primary mandate of price stability as enshrined in Article 127(1) of the Treaty on the Functioning of the European Union. The ECB’s original monetary policy strategy was adopted in 1998 and reviewed in 2003. Since then, the world has seen major changes that present central banks with numerous new challenges, the ECB described in a statement.

According to the new strategy, the headline Harmonised Index of Consumer Prices (HICP) remains the appropriate index for quantifying the price stability objective for the euro area and will be retained as the price index used to measure euro area inflation. The Governing Council considers that price stability is best maintained by aiming for a two per cent inflation target over the medium term. The previous double-key formulation featured a definition of price stability in terms of „below, but close to two per cent“. However, the Governing Council has decided to recommend a roadmap to include owner-occupied housing (OOH) in the HICP. A roadmap foresees four main stages for moving to an HICP including OOH costs.

Lane also stressed the integrated analytical framework: „My personal view is that in the end we have to bring together the analyses. We only make one decision.“ Also central bank communication was one of the key issues and is supposed to be expanded. „We think it is important to communicate with the wider public,“ Lane said. „You have already seen some of the communication revision, we will publish more of our background thinking.

“The recent strategy review won’t be the last over the coming years. „It is important to have a regular review cycle, otherwise starting a review is already a signal,“ Lane explained. The next review is already scheduled for 2025.