What is at the heart of the current European financial crisis: deficiencies in the banking sector or excessive government debt and political mismanagement? This question was discussed by Josef Ackermann, Peer Steinbrück and Otmar Issing together with academic scholars in Berlin on December 15th. A major point at issue was whether the banking sector shall incur liability for credit defaults or not. The legitimacy of political decisions is being confronted by urgent re-financing needs. Representatives of the event’s organizers, European School of Management and Technology (ESMT), Hertie School of Governance and the House of Finance/Goethe University Frankfurt, enriched the discussion with well-founded and original explanatory approaches.

Differences in the speakers’ opinions became obvious from the outset, in the first keynotes of the first panel. Josef Ackermann made a case for central demands of the financial sector: no further haircut on government bonds and no restrictions on banks’ scope of action. The Chairman of the management board of Deutsche Bank also voiced harsh criticism against the recent stress-test conducted by the European Banking Authority (EBA): “The tightening of capital requirements was an arbitrary change of rules during the process – in times of extremely fragile markets – and is not suited to re-establish confidence.” According to Ackermann, the principal problem is the government debt crisis, whereas the level of equity ratio in a stress-test is less relevant. The most pressing issue, in his opinion, is the need to re-finance 500 billion Euros of bank liabilities and 700 billion Euros of government debt in the PIIGS countries. 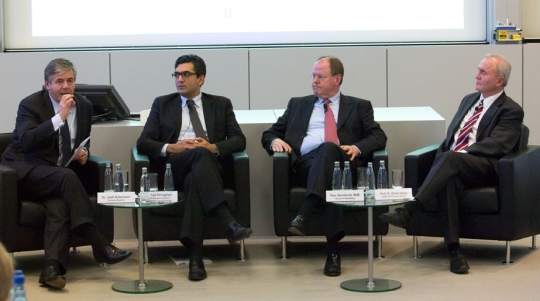 In the eyes of Peer Steinbrück the explanations of Josef Ackermann do not go far enough. The SPD politician referred to the deregulated system and the banks’ hunger for returns. He brought to mind   the mistrust within the financial system and the current collapse of the interbank market. Liquidity is being hoarded only at the European Central Bank (ECB). In his view, those responsible for the crisis were not held liable, rather state governments were forced to stand in. “When the creditor does not incur liability, when risk and liability are no longer connected, we face a situation that contradicts all market principles.” Steinbrück also made the point that volumes of high-risk transactions without real basis are increasing exponentially which is politically unacceptable and highly risky for the stability of the economy and society as a whole. Politics needs to impose the principle that every market, every market participant and every product must be subjected to oversight and regulation.