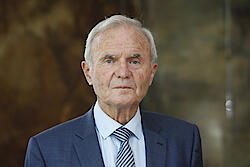 As of January 1, 2023, Prof. Dr. Drs. h.c. Axel A. Weber will succeed Prof. Dr. Dr. h.c. mult. Otmar Issing as Chairman of the Board of Trustees. Issing, who has held the position since the HoF’s inauguration in 2008, played a key role in establishing the House of Finance as a place for interdisciplinary, finance-related cutting-edge research, policy advice and continuing education.
Axel A. Weber was elected at a Board of Trustees meeting on November 8, 2022. His scientific career and work are a perfect fit for the dialogue between science, politics and financial practice, the House of Finance is dedicated to.

Otmar Issing, who will hand over the baton to Axel A. Weber at the end of the year, is certain that the future of the House of Finance is in the best hands with his successor, who, just like himself, is familiar with all the House of Finance’s areas of activity: "I am delighted that with Axel A. Weber we have been able to win over an academic for the chairmanship of the Board of Trustees who combines the experience of an excellent researcher, top banking supervisor and banker."

When he leaves office at the end of the year, Otmar Issing will hand over a well-functioning house that is home to, among others, two university departments from the Faculties of Law as well as Economics and Business, graduate and advanced education institutions and several research institutes or units, including the Leibniz Institute SAFE – itself an example of how under Ottmar Issing’s patronage, the HoF has been able to develop as an interdisciplinary incubator of finance research and knowledge transfer in politics and society.

The designated successor, Axel A. Weber, is looking forward to supporting and further developing the House of Finance, whose concept of interdisciplinary, internationally networked research and teaching is more relevant than ever, in its contribution to tackling the challenging issues of the present and the future: "In Frankfurt am Main, we need excellent finance research to provide policy-makers and the financial sector with orientation and know-how throughout the ongoing transformation processes, and we must continue to foster the education and training of qualified young professionals in this field. To that end, we intend to make even greater use of the opportunities offered by a comprehensive university in the future."