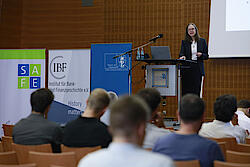 Regulatory requirements and technological developments in times of blockchain and digital currencies are apparently contributing to the thinning out of the global correspondent banking network on which private payment transactions have essentially been based since the 19th century. As Schenk pointed out, the network of correspondent banks evolved not only at the pace of global trade expansion but also through improved communication capabilities. Examples of this development range from the expansion of the overseas telegraph network in the era of the first globalization at the end of the 19th century to the use of telex and fiber-optic internet connections during the second globalization.

Schenk further emphasized that even after World War II, the expansion of the infrastructure of the international payments network was often the result of private initiatives. The establishment of the private Clearing House Interbank Payments System in the U.S. for large-volume payment transactions is an example of this, as is the payment information system SWIFT founded in the early 1970s.

The private character of the international payment traffic infrastructure was maintained, even though it became the focus of state regulation in the wake of the historical bankruptcy of the private bank Herstatt. It was not until the 1980s that real-time gross settlement systems were introduced by central banks. But this did not change the growth of the private SWIFT payment information network and reliance on inter-bank correspondent relationships.

Catherine Schenk concluded by addressing why the international payments system, which is about 150 years old in its main features, could lose its importance. In addition to inefficiencies caused by the time taken for settlement and the political influences that have a disintegrating effect, the transformation thrust comes primarily from new blockchain technology, which could possibly even make the existing payment traffic system obsolete.